Already at the RLI Energy-Dialog on September 10th, Berit Müller, Head of the Research Unit Transformation of Energy Systems, officially announced her change of position. She is leaving the institute in October to become Managing Director of the Berlin-Brandenburg Divison of the German Solar Energy Society (Deutsche Gesellschaft für Sonnenenerfie – DGS). “I am looking forward to this new task,” says Berit, who has been a founding member of RLI since 2010. “As an active researcher at RLI, I was able to achieve a great deal for the Energy Transition and have built up a strong team in the field of energy system analysis and power grids. At DGS, the leitmotif remains the same – a sustainable energy supply with 100 percent renewable energy – also the strategic part of my work remains, only the focus shifts to the implementation level with worldwide and local solar, training, and standardization projects. But research projects will also be part of my work at DGS.” 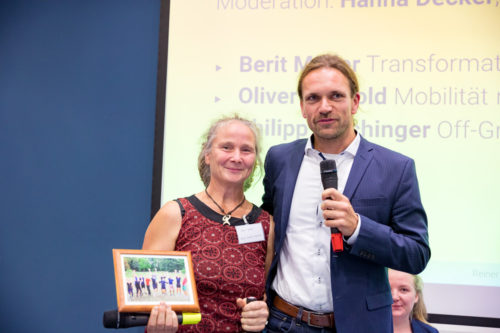 Berit Müller’s (l.) change of position was officially announced at the RLI Energy-Dialog on September 10th 2018. (In the picture on the right: Oliver Arnhold). | Image: RLI, Jörg Unkel

RLI Managing Director Kathrin Goldammer thanks Berit for her many years at the institute: “With Berit, our most experienced employee is leaving us, nobody has worked at the institute longer than she did. She has paved the way for today’s Research Unit Transformation of Energy Systems and laid valuable foundations for energy system modelling. We will all miss her experience, but I am very much looking forward to working with the DGS and I am sure that Berit will also make a difference there for her heart project, a sustainable future for all”.

Berit’s successors at the RLI are the former researchers Editha Kötter and Mascha Richter, who will assume equal responsibility for the management of the unit. Both have already managed individual research projects and worked closely with Berit. Editha’s projects had an open science focus and dealt with power grids, heat sector coupling, and databases, while Mascha concentrated on energy system analyses and stakeholder participation.

The second major change at RLI results from the foundation of the spin-off Localiser RLI GmbH: Oliver Arnhold, Head of the Mobility with Renewable Energy Unit, becomes part of the management team – he also stays in his position as Unit Head at RLI. He will therefore be supported with immediate effect by two Team Heads, whose positions have been newly created and who will each take over half of the Research Unit: Fabian Grüger will head the System Analysis Team, while Norman Pieniak will take over the Municipal Mobility Team. Both were previously researchers at RLI and have already managed various projects in the fields of e-mobility, hydrogen, and infrastructure.